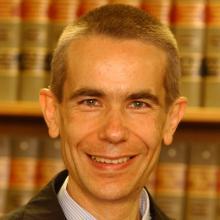 END_OF_DOCUMENT_TOKEN_TO_BE_REPLACED

At Loyola, Dr. Puder has taught and published in the areas of international law, comparative law, civil law, and environmental law. In addition to his service in foreign summer programs, he has recently represented Loyola in Austria, Columbia, India, France and Spain to explore inter-institutional collaborations. In addition to speaking English, German, French, and Spanish, Dr. Puder has intermediate knowledge of Russian, Arabic, Portuguese, and Italian. In his spare time, he is a concert violinist.

Dr. Puder, who has pursued his legal studies in the Federal Republic of Germany, the Republic of South Africa, and the United States, has earned the right to practice law in both common law and civil law jurisdictions. In the United States, he is a member of the New York State Bar and the U.S. Supreme Court Bar. His German multi-bar certification is recognized throughout the European Union.

Dr. Puder has previously been employed in the Environmental Science Division of Argonne National Laboratory (a U.S. Department of Energy laboratory managed by UChicago Argonne, LLC), while teaching at the Georgetown University Law Center and the George Washington University School of Law. He also taught at the Bucerius Law School (Hamburg, Germany) and the Universidade Petrobras (Rio de Janeiro, Brazil). Dr. Puder has further served as Congressional Fellow with the U.S. House of Representatives and as Law Clerk with the Munich Upper Regional Court of Appeals.

Comparative, Civil, and Roman Law; Environmental and Energy Law; and Public International Law and the Law of the European Union.