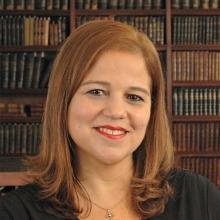 END_OF_DOCUMENT_TOKEN_TO_BE_REPLACED

María M. Pabón is an expert in immigrants’ rights (including the education of immigrant children), immigration law and diversity/multicultural matters in the legal profession.  She has researched and written about criminal law.  She has also done research in the areas of family law and inheritance law as it pertains to those who are not U.S. citizens.

A prolific author, Pabón has placed articles in journals such as the Harvard Latino Law Review, the Georgetown Immigration Law Journal, the Hastings Women’s Law Journal and the Seton Hall Law Journal. She has also published articles in Revista Juridica de la Universidad Interamericana and Revista de Derecho de Extranjeria. She also focuses her research on issues concerning Latinos, race and the law, and the status of women lawyers. She has published articles on topics such as the rights of immigrants in the U.S., Spain’s immigration laws, undocumented workers in the U.S. and Argentina, as well as the impact of immigrant nurses on the nursing shortage in the U.S.  Her book, Persistent Inequality: Contemporary Realities in The Education of Undocumented Latino/a Children (with Gerardo R. López), was published by Routledge: Taylor and Francis Group in late 2009. Her current research projects are (1) marriage contracts; (2) an examination of U.S. and European immigration laws; (3) the status of women lawyers in Louisiana, and (4) diversity in the legal profession during the economic downturn.

Pabón is a frequent keynote speaker and presenter to members of the judiciary in judicial education programs, as well as to members of the bar and to those in legal education and higher education. She has been selected to participate in leadership programs including the Ignatian Colleagues Program of the American Jesuit Colleges and Universities and Indiana University's Next Generation@IUPUI Program.

In 2013, Hispanic Business named her one of the 50 most influential Hispanics in the U.S. Also in 2013, New Orleans CityBusiness named Pabón a Woman of the Year and the New Orleans Living magazine recognized her as a top Latina innovator. She has been honored by the National Latino Law Students Association with an Excellence in Leadership Award, and has been selected twice by the National Diversity Council as a Most Powerful and Influential Woman in Louisiana.

Pabón currently serves on the Diversity Committee of the Louisiana State Bar Association and on the board of the Louisiana Supreme Court Historical Society. Prior to coming to Loyola, Pabón was a Professor at Indiana McKinney School of Law and also served on the faculty at the University of Missouri Columbia School of Law. She served on the Indiana State Board of Law Examiners from 2008 to 2011, having been named to the board by Indiana Supreme Court Chief Justice Randall T. Shepard. She was also an appointed member of the Indiana Supreme Court's Court Interpreter Certification Advisory Board, a project of the Race and Gender Fairness Commission. She is an inaugural member of the Latino Affairs Committee of the Indiana State Bar. In addition, she has served on the editorial boards of Bender’s Immigration Bulletin and the Computer Assisted Legal Instruction (“CALI”) center. She has been a contributing editor to the Jotwell and Nuestras Voces Latinas blogs.

Pabón was the recipient of the 2011 Sigueme Award from the IUPUI Latino Students Association; of the 2008 Diversity Attorney in Practice Award from the Indiana Lawyer and the 2007 Rabb Emison Diversity Award from the Indiana State Bar Association. Professor López received the 2006 Trustees Teaching Award from Indiana University. She was named a Dean's Fellow in recognition of scholarly excellence at the Indiana University School of Law, Indianapolis. She was the recipient of a Special Recognition Award from the Chair of the Second National People of Color Legal Scholarship Conference held at the George Washington University School of Law in October of 2004. The law school's Hispanic Law Society (HLS) gave Professor Pabón their 2004 Award "in recognition of her commitment to her students and loyal support of the HLS." She has also received awards from the Hispanic Bar Association of Pennsylvania, the Travis County Texas Women Lawyers Association (for contributions to the minority community) and from the University of Missouri Columbia School of Law, where she was a recipient of Faculty Performance Shares.

Pabón has served on the Editorial Advisory Committee of the National Conference of Bar Examiners. The Editorial Advisory Committee reviews and comments on articles for publication in The Bar Examiner, which is published quarterly, and is the only national publication related to bar admissions. She has also served on the Diversity Committee of the National Conference of Bar Examineers.  In 2010, she was elected to the American Law Institute (ALI), one of the highest honors in the legal profession.

Pabón is a graduate of the Teacher Preparation Program at Princeton University and has taught numerous courses in the U.S. and abroad. She has taught at the University of Puerto Rico, Universidad Rey Juan Carlos in Madrid, Spain, lectured at Universidad Latina in Panama, and collaborated with the faculties at Renmin University in China and Universidad Nacional de la Plata in Argentina. She has taught the following courses in her law teaching career: Criminal Law, Family Law, Immigration Law, Professional Responsibility, Trusts and Estates and a seminar on the Rights of Noncitizens.  She has also taught Women's Diversity and the Law to honors undergraduates at Loyola University New Orleans and taught graduate courses in Law and Ethics.

Pabón served as Dean of Loyola University New Orleans College of Law from 2011 - 2015.   During her tenure as Dean, the College of Law increased its bar passage rate and fundraising, and enacted groundbreaking initiatives such as the Incubator Program and the Panama Summer Program.

Diversity and the Law