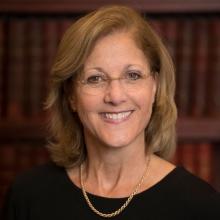 END_OF_DOCUMENT_TOKEN_TO_BE_REPLACED

Madeleine M. Landrieu became Dean of Loyola University New Orleans College of Law (Alma Mater) on July 1, 2017.  Prior to her appointment, she served as a judge on the Fourth Circuit Court of Appeal for the State of Louisiana, and prior to that as a trial court judge on the Civil District Court for the Parish of Orleans. During her 16-year tenure in the judiciary, Dean Landrieu served as President of the both the Louisiana District Judges Association and the Louisiana Judicial College. She also served as a member of the Board of Louisiana Judges and Lawyers Legal Assistance Program.

Prior to being elected to the bench, Dean Landrieu was a litigator in private practice.  She has tried numerous cases to verdict in both judge and jury trials, representing clients in the areas of products liability, the general maritime law, Jones Act, medical malpractice, general negligence, family, juvenile, and criminal law.  She has argued before several state circuit courts of appeal and the Louisiana Supreme Court. While in law school here at Loyola, she was a member of the Law Review, the Moot Court Board, and a student in the Law Clinic.

Dean Landrieu has spent a large part of her career advocating for improvements in laws and policies relative to children who come before the courts as a result of abuse or neglect. She is a founding Board member of the Louisiana Institute for Children in Families, and was instrumental in the launch of Louisiana’s Quality Parenting Initiative and Louisiana Fosters, efforts to raise awareness about the needs of abused and neglected children and their families. Dean Landrieu is a long-standing member of the Board of Directors of Covenant House New Orleans, a service provider for homeless, at-risk, and trafficked youth.

In 2018, Dean Landrieu was instrumental in creating a partnership between Loyola University New Orleans College of Law and the New Orleans Police Department to further the department's work in the area of ethical policing and active bystandership.

Dean Landrieu is the recipient of the Michaelle Pitard Wynne Professionalism Award from the Association of Women Attorneys; the Gillis Long Poverty Law Center’s Public Service Award; and the Louisiana State Bar Association’s Pro Bono Publico Award,  and the President’s Award. In 2017, Dean Landrieu received the inaugural President’s Award from the Louisiana Judicial College for her “dedication to judicial education, particularly in the areas of new judge training and mentorship.”