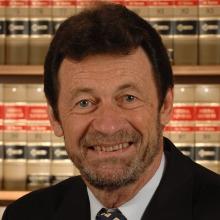 END_OF_DOCUMENT_TOKEN_TO_BE_REPLACED

Prior to joining the faculty at Loyola, Professor Vetter served as Acting Chief Trial Attorney for the United States Department of Defense, U.S. Army Corps of Engineers in Washington, D.C. His initial interests included property and urban planning law. During the seventies, he drafted one of the country's first Demolition Moratorium Ordinances, which played an important role in the preservation of the architecture on St. Charles Avenue in New Orleans.

Professor Vetter was a member of the three person Comite Directuer for the Societe Internationale Pour L' Historie de Droits de l' Antiquite, serving with Professor Peter Burks, then holder of the Regius Professorship for Civil and Roman Law at Oxford, and Dean Peter Pieler, of the University of Vienna School of Law. He also founded and was Director for 10 years of the Loyola College of Law's Foreign Summer Programs.He is currently Director of Latin American Programs, in Rio, Brazil, San Jose, Costa Rica and Cuernavaca, Mexico.